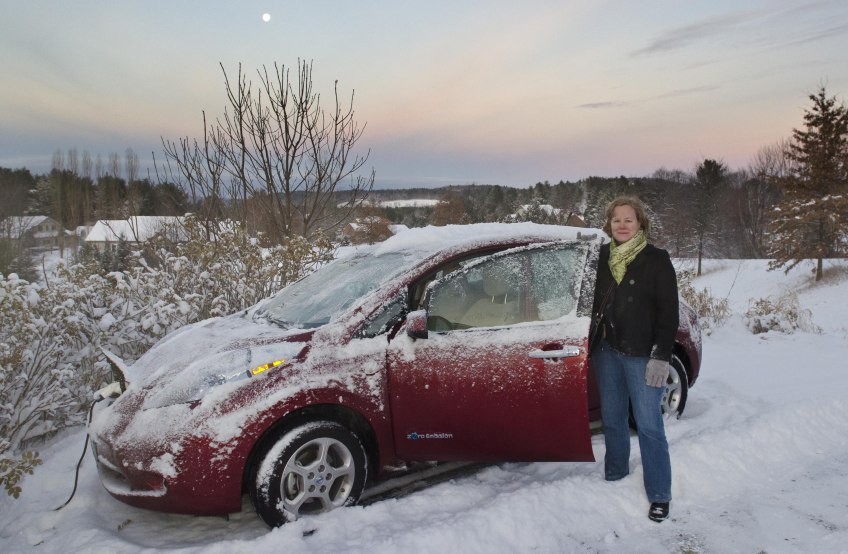 Karen Glitman loving the snow traction on her Nissan LEAF.

The Burlington Free Press featured Drive Electric Vermont's Karen Glitman on her first year of driving electric. Some highlights from Karen's blog (excerpted in the article) below:

I’m leasing the LEAF SV (lower trim package). That was $1,000 down and $294 a month. Not cheap — but if I save three tankfuls of gas at $50 each a month that comes to $144. My electric bill will go up — the estimate is by about $50 if I do all my charging at home. I know there are about 18 charging locations in Vermont and five more planned. And in two days I’m getting solar panels so theoretically I’ll be driving a solar-powered car.

Nothing! For me, after 30 years of driving a stick shift the biggest adjustment is driving an automatic.

Standing in traffic on my way home last night I was struck by the noise all the other cars made. Since I’ve had my EV I’ve also noticed the sound of ICE’s (internal combustion engines) starting up — what a racket!

My husband finally decided to have a go at driving the all-electric car. We were headed back from Burlington and I had told him about my experiences using Drive versus Eco mode. Drive is great when heading out into traffic (I’ve never done 0-50 mph faster). We got off the interstate in Richmond and folks who know that intersection know that you are often presented with a small window of opportunity to make the turn. He put it in Drive and off we went. “Wheeee” he said, “That was fun.”

While this sounds like an opening to a joke, I have no punch line.

And, time to get snow tires put on. While the driveway got plowed I still had to get through some snow — no problems. The traction on the Leaf is fantastic. Must be that 600 pounds of batteries right down the middle. No need to put sand in the trunk with an EV. I drove with the heater blasting. While the heater certainly drained the battery, just like the AC, I still had plenty of juice to get there and home at the end of the day with plenty left over. So, when folks ask me how it handles in the snow my answer is, “way better traction than any conventional car I’ve owned.”