A Visit to the Tesla Factory

It's not every day that you get to visit the Tesla Factory. My Tesla Model S sedan was delivered in March 2013, and ever since I'd been thinking about flying to California to tour the place where CEO Elon Musk is revolutionizing the electric car industry. It's an opportunity only available to Tesla owners—but for me and my 15-year-old son Cooper, it was also the making of a great father-son adventure. 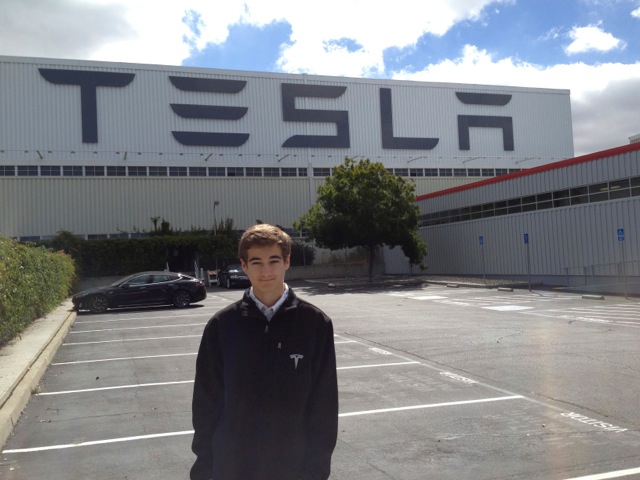 For those not familiar, Tesla Motors was founded in 2003. Their first car, the Tesla Roadster, came out in 2008. It was built on a Lotus Elise chassis, to which Tesla added an electric drivetrain and a modified interior. The Roadster quickly shattered every preconception people might have about electric vehicles (EVs). It was blindingly fast (0-60 in 3.7 seconds) and could go 200 miles on a charge. Due to Tesla's limited production volume, the Roadster was an expensive car, but it was a good first step toward proving that EVs need not be lesser cars. Tesla's next step was to build a luxury electric sedan that could compete with the world's finest gasoline powered counterparts. This would be the first car Tesla would build from the ground-up, and a new factory was needed to do it.

Inside the Tesla Factory

Tesla purchased a former GM/Toyota car factory in 2008. To say this factory is large is an understatement. Located in California's Silicon Valley, its multiple buildings comprise five and a half million square feet of space. That's equal to 95 football fields! Tesla only uses about 20 percent of it so far. The factory currently employs 3,000 people, working two shifts.

The first thing we noticed inside the factory is sheer scale of everything. When we visited (June 2013), Tesla was producing about 500 Model S sedans each week, or 100 per day. The process begins with large rolls of sheet aluminum which are cut into appropriate size pieces for the various parts of the chassis and body. Aluminum was chosen for its light weight and superior strength. The Model S is the only all-aluminum car made in the U.S.

Those sheets of aluminum get pressed into the desired shapes in a series of mammoth hydraulic presses. The ones shown here, the largest in the U.S., were purchased from Chrysler. A robot feeds the flat sheets into the press on the right, and after pressing, another robot picks up the part and places it into the next press. Complex chassis parts are pressed in multiple steps, to prevent sheet metal fatigue. 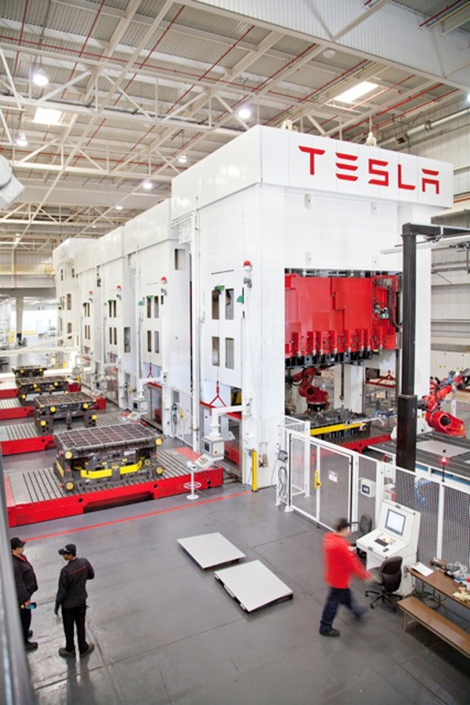 Parts are organized and sent to the “body shop” where they'll be needed next. Unlike many other car companies, Tesla makes most of its own parts in-house. The factory has its own plastic molding department where many plastic parts are produced. This allows them to keep tighter control of quality and inventory flow. 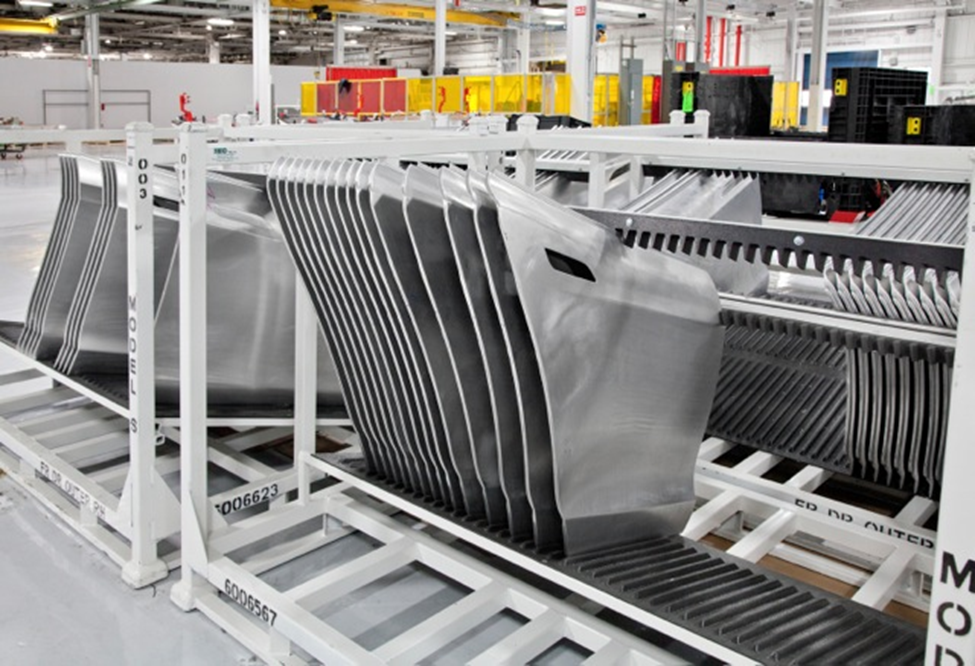 The chassis of the Model S begins to take shape as robots weld the various parts together. This stage of assembly is highly automated. The robots are each capable of multiple tasks and can change tools in seconds. The same robot might be applying adhesive at one moment, and spot welding seconds later. The coordination between adjacent robots is just amazing. 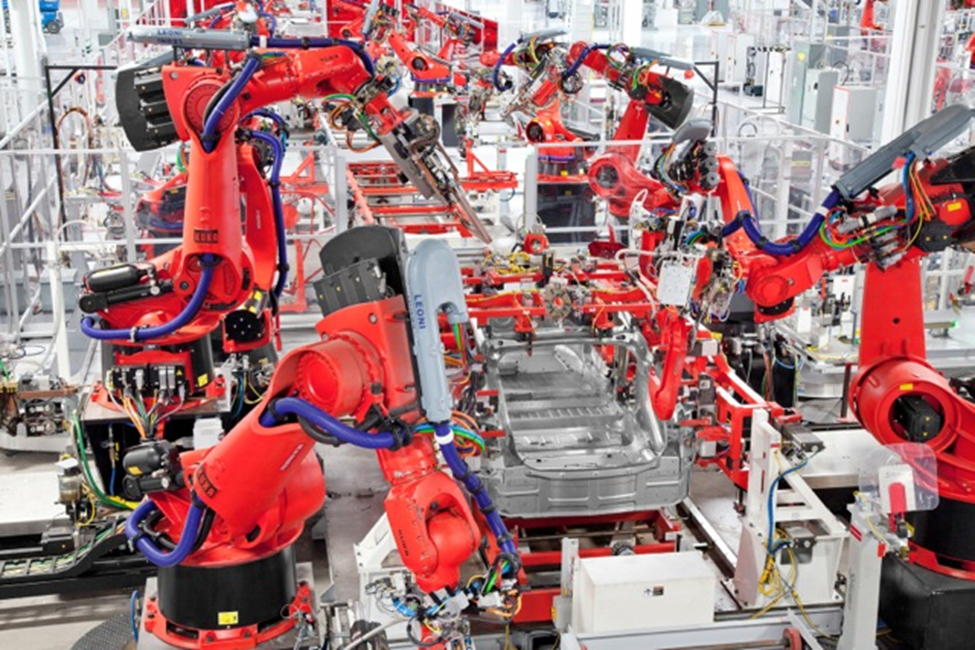 The paint shop is a virtual ballet, as robots apply paint to the aluminum body with absolute precision.

From this point forward, the painted chassis rides on a "smart cart" to various assembly stations. The cart follows a magnetic stripe on the factory floor. Note that the doors ride on the side of the cart to allow for easier door assembly. This is the most labor intense part of the process, and it is also the most beautiful part of the factory. The floors are painted glossy white, and the lighting is bright and inviting.

"A great place to work," commented one worker. 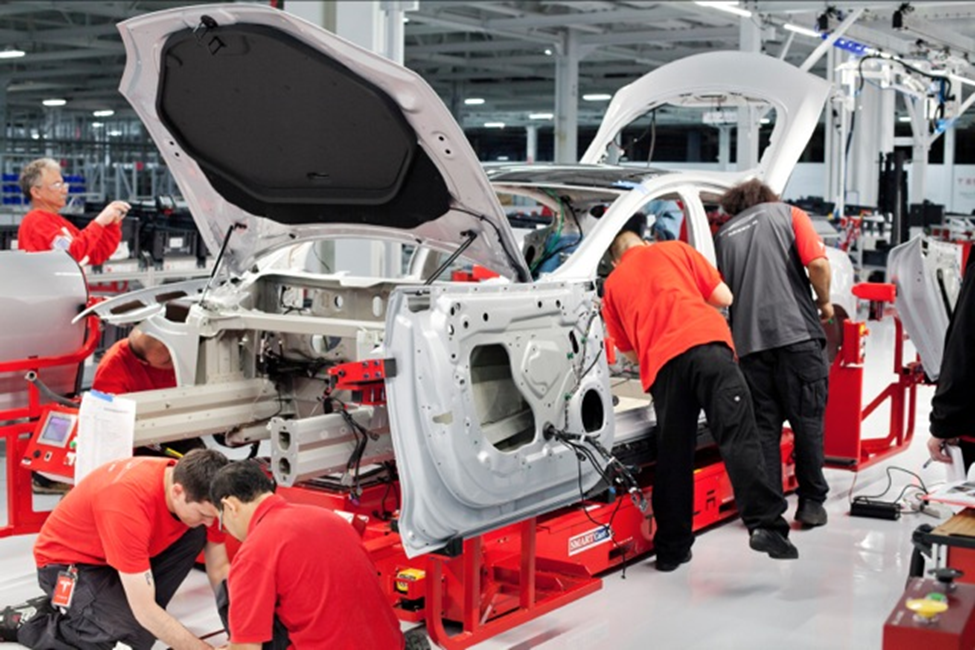 The octagonal struts projecting from the front of the car (pictured above) are part of the Model S crash safety system. The electric motor actually mounts between the rear wheels.

The car's motor and electronics are manufactured on the second floor of the factory, as is the battery pack. Since these parts include a lot of proprietary technology, visitors are not allowed in those areas.

Every Model S made on the Tesla assembly line has already been reserved by a customer. Typically, the cars will first travel to a regional service center for a pre-delivery check, and then they get delivered right to the customer's door.

Here’s my Model S arriving in South Burlington back in March. The car arrived with a “delivery specialist” who spent two hours going over every detail of the car with me. 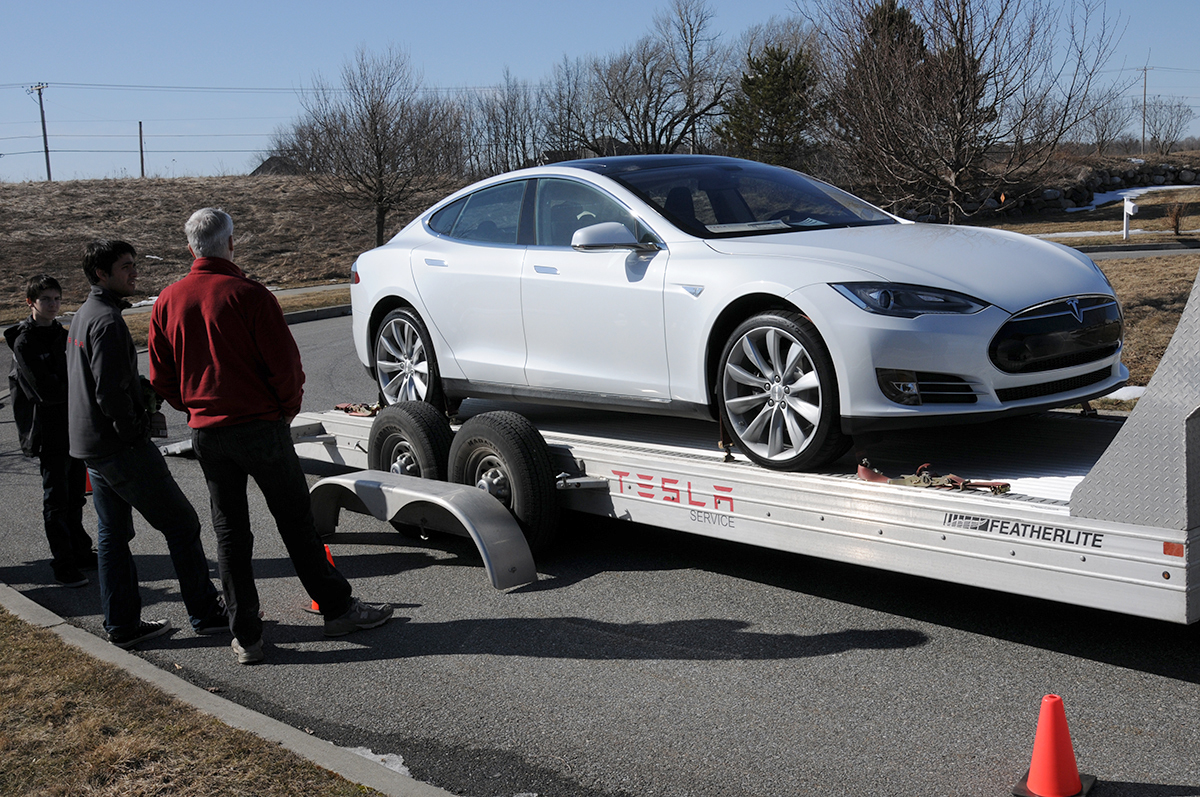 Our factory trip was a wonderful way for me and Cooper to spend some time together. We knew quite a bit about Tesla before we got there, but it still amazed us how much ingenuity and sheer stuff it takes to make a fine automobile. I’m sure it won’t be our last trip.

(And no, he’s not getting a Tesla for his 16th birthday.)

• Check out this video produced by Wired Magazine as they go inside the factory.
• Read another Vermonter’s Tesla testimonial

Do you know anyone who owns a Tesla or has visited the factory? Share this post and let us know what they think!